Citadel: Forged with Fire from Blue Island Studios, is a massive online sandbox RPG with elements of magic, spellcasting, building, exploring and crafting. As a newly minted apprentice of the magic arts, you set off to the dangerous world of Ignus. Tame mighty beasts, forge alliances, explore uncharted territories or fight for dominance!  This Citadel: Forged with Fire review is based on the Early Access version, keep this in mind as the product is not in its final state and many things may change as the game is in development. 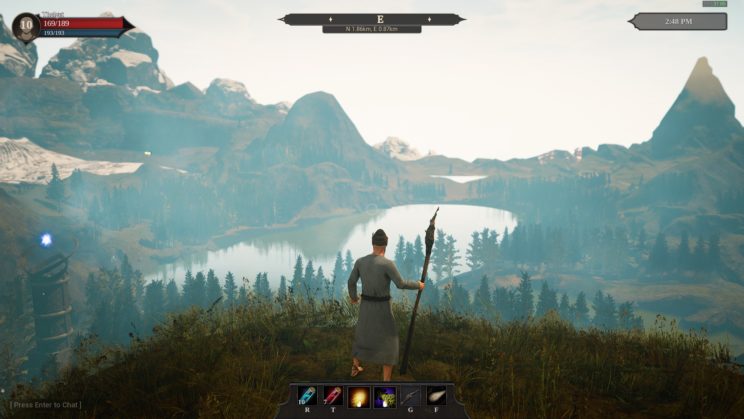 In Citadel: Forged with Fire, you are a new apprentice mage in the magical world of Ignus.  Free to roam the vast 36 square kilometer landmass of sweeping plains, forests, craggy mountains, swamps and the snow covered tundra, in this survival sandbox.  As you gain experience, develop your mage through a variety of skills trees related to weaponry, spellcraft, building, alchemy and epic flight.  Take to the skies on a broom or tame an epic dragon and scour the lands aloft, swooping down to conquer unsuspecting prey.

Citadel: Forged with Fire is a massive sandbox game and to be fair this review is based on play conducted during Early Access.  Also, as it is such a vast world and dozens of hours could be spent growing your skills or exploring the land, I have only scratched the surface in roughly twelve hours of gameplay thus far.  As my experience within the game deepens, and the product matures through development, I will update my review accordingly.

As with most MMO games, life begins with character creation, allowing you to customize your virtual self through a variety of characteristics.  Citadel’s character options are pretty limited in Early Access; gender selection, limited head variations, a few hairstyles and color adjustments.  What seems strange initially, in addition to choosing the color for your hair, skin and eyes, you also pick a fingernail color.  Initially I questioned this choice when having such limited options in the other categories, “Why do I care about my freakin nails?”.  Realizing later, when playing in first person, how this does allow a bit of variance as you cast spells or wack away at the world. 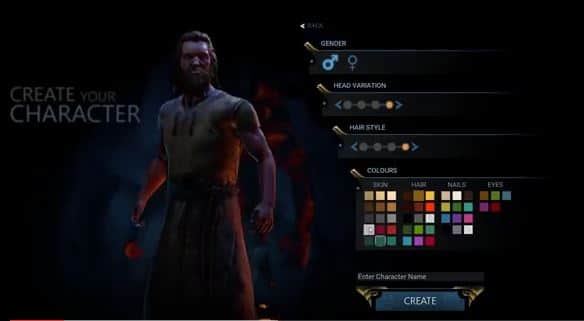 Before spawning into the new world, you’re able to select from three different starting areas; Raincourt (west), Heathclyffe (middle) and Eastreach (Eastern).  I chose to go with Raincourt, which based on comments from the community, this is supposedly the easiest of the three options due to plentiful resources.  Spawning into the world, you witness your arms being forged with magic essence as you emerge within some sort of citadel, designated a safe zone.  Controls are typical of most MMOs, WASD for movement, I for inventory which also accesses a clickable menu exposing your skill trees and other character aspects.

Initially the game has a very Skyrim feel to it, but after some time in the world it slowly becomes its own. TAB allows you to switch to third person mode, which I prefer, but this view reveals a rather stiff running animation.   No real introduction or tutorial is provided to guide you initially, although this goes along with the exploration theme of the game (you can interact with monuments in the starter area that do give short tutorial blurbs). You begin to gain experience through foraging, killing wildlife or constructing items through the game’s crafting system.  I am aware of the different methods players have used to “power level”, but as evident by my lowly level 11, I chose to play the game straight and grow gradually. 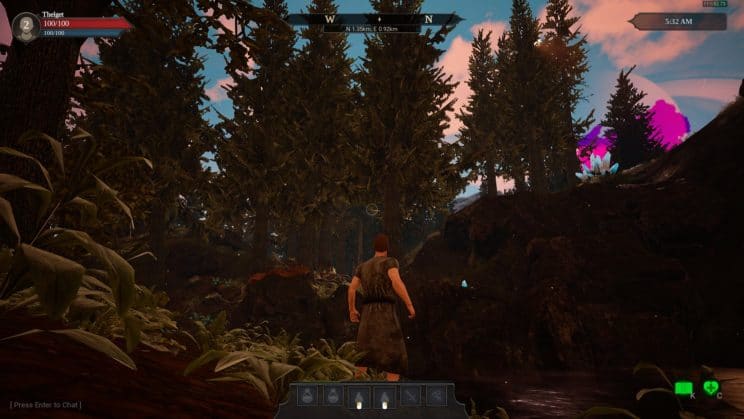 I never do much research into games before I play them, choosing to just experience things firsthand and learn as I go, so no min-maxing here.  I put my first points into Staves to embrace the whole Mage thing, any additional points I used to start working my way through the structure talent tree so to start building a home.  Taking the extraction spell is a must and greatly improves scavenging, grabbing heaps of materials in a fraction of the time.  The build system works well, the parts of your structures easily “snap” together and auto-rotate, almost magically, to the different possible positions.  Having played Ark for so long and being easily frustrated by misaligned walls and foundations, Citadel’s build system was a gift from heaven.  It wasn’t overly time consuming to collect the material and build a basic structure, my only complaint being the ability to build a storage chest takes a bit longer to acquire, leaving you to struggle with space management.

Weapon choices in Citadel: Forged with Fire consist of the Gauntlet, Wand, Staff and melee.  I briefly tried the gauntlet but it didn’t really suit my play style and I quickly switched to staff.  Once you’ve chosen a weapon, go to your character screen, select the knowledge tree to pick a corresponding spell.  Initially your weapon has 2 spell slots, which are slotted by going to the spellbook tab and dragging your new spell to an empty slot.  As you progress in the game and create bigger, badder weapons, you’ll get access to more spell slots to use.  The staff with a slotted fireball spell worked well, I had fun prancing through the forest taking down wild boars and those pesky fairies.  Watch out for the ogres, they hit hard and it takes quite a bit to bring them down!

Citadel is a great looking game, from the moment you venture out and begin your adventures, you’ll feel the immensity of the world and awe at its beauty.  I often stopped at various points to pan the horizon to take in some of the graphic marvels, excellent work for an mmo.  However, there were quite a few animations that made me cringe and need to be mentioned.  I never was able to get used to watching my character run while in third person view, it was painful.  I can only describe the animation to be as if my poor mage once lost a fight with a superior wizard, and as a result, had his staff permanently rammed up his bum.  Additionally, swimming is horrible.  The water does not look natural, my character floats strangely on the top and almost appears to float on air.  It is still Early Access, so I expect these sorts of things will be refined over time…hopefully. 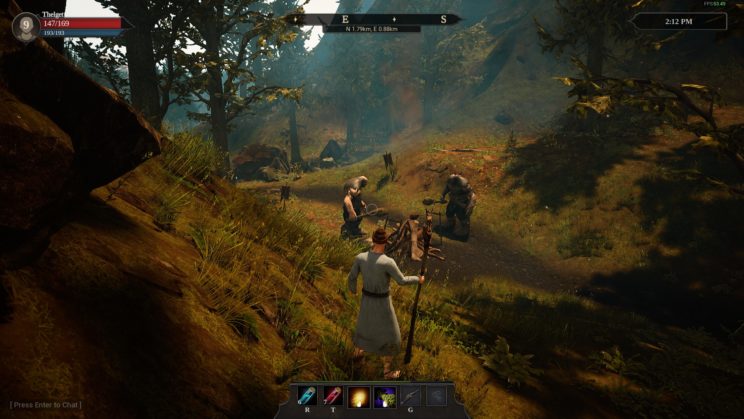 Sound design appears to have taken a back seat to make way for graphic and visual design. Atmospheric sounds are almost non-existent or didn’t make any impression on me. Audibly, the only time the game really came alive, was when I shot a fireball across the map and it explodes when hitting its target. Add some solid environmental sounds, queue a thunderstorm or forest winds, and this world would come alive.  Keep an eye on the patch notes and hope this is on the horizon.

At the time of this Citadel: Forged with Fire review, the game is only $20 on Steam while in Early Access.  Given the massive world, the chance to fly around like Harry Potter and the potential oozing from the screen, you can’t beat the price.  Understanding that you’re buying into a game still under development, expecting a well oiled machine and stellar performance is overly optimistic.  Frames per second were average but given how beautiful the world looks and further optimization is nearly guaranteed, not bad for an early edition.  That being said, my server experience was plagued with rubber banding, disconnects and ghost forest foliage (plants spotted from a distance would disappear as I neared their position).  Creatures can sometimes be bugged to where they stand motionless as you unleash your wrath, making some fights uneventful. 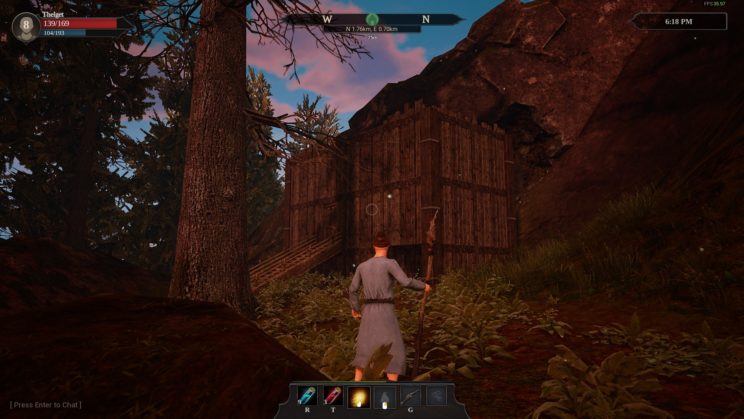 Should You Get It?

Overall Citadel: Forged with Fire shows promise and the developers have been quick to push out patches and have done well to communicate its future.  I admire the vision and what they’ve managed to deliver so far, if they stay the course this could be quite the gem.  Fans of the D&D/fantasy rpg genre should love the chance to wield magic in this open world sandbox, tame an epic flying beast or hop on their broomstick to soar above the world.  Tweaks are necessary; attention to buggy animations, creature AI, environmental sounds, the initial slow progression system and a few other bits.  All in all, nothing you wouldn’t expect from an Early Access game.  If you understand all that going in, and you’re ready to ride the development cycle and patiently wait for the inevitable final release, Citadel: Forged with Fire is a good deal for the $20 sticker price. 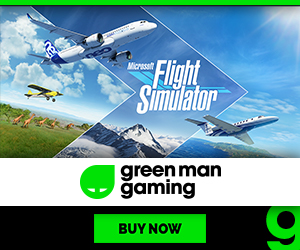