Truck & Logistics Simulator is a new game from developer Simula Games and publisher Aerosoft, released as part of Steam Early Access on June 23rd, 2020. If you know the publisher Aerosoft then you know they are behind many classic simulation games like Omsi 2, Train Simulator, Aerofly FS 2, and many more. In Truck & Logistics Simulator you take control of more than 20 unique vehicles to perform complex loading tasks and deliver diverse cargo directly to customers. Master all the individual logistics vehicles like forklifts, cranes, telescopic handlers, wheel loaders, and many more to load up your vans, pickups, and heavy trucks.

Diving into this review of Truck & Logistics Simulator, keep in mind this game is newly released and part of Early Access, therefore not a final product. If you are unfamiliar with Steam Early Access, games taking part are still in development and not the final release version. Thus, the game as reviewed does not necessarily reflect player experience as the game receives new updates and moves closer to its final version.

T&I Simulator offers players a single-player and multi-player game mode, the majority of this review is based on the single-player experience. You begin with enough currency to purchase a small car capable of holding a single cargo container, but by successfully completing deliveries you can save for bigger and better vehicles. While in the garage, the area with all your vehicle purchase choices as well as those you own, customization of your vehicles color, windscreen, dashboard color and headlights are possible. To begin the game, just hit the “drive” and you’re off into the world of logistics!

To begin, the game’s loading screen from the garage features a splash screen of the keyboard layout with all the controls explained, a quick and easy way to getting your ready to get busy. No lengthy tutorial or hand-holding, it’s relatively simple and straightforward to start doing missions immediately. Find delivery jobs by locating the highlighted green circles on the map. Simply drive to the location of your choice and park on top of the green floating pallet to get a list of delivery options. Your vehicle’s capacity will limit what is available to you, obviously the bigger and more capable vehicles will get missions with larger rewards. If you choose a mission that shows a trailer it will magically appear next to your vehicle as you begin the loading phase.

Load ‘Em Up And Truck ‘Em

Initially, when I realized I would have to load the vehicle myself, I thought this aspect of the game was going to frustrate or annoy me. To my surprise, it turns out to be one of my favorite things to do in the game. Loading is not overly complicated; first load your vehicle and back away, doors will close automatically and then load the trailer if needed. Once loaded, back up to the trailer and hit “T” to attach to your vehicle and you’re ready to roll.

For some, this process may not be difficult enough for simulating real-world experience, and I agree. The slots on the pallets are only cosmetic, they don’t affect the forklift’s forks when aligning to pick-up the load. While loading the vehicle or trailer, if you “miss” and hit the cargo on something or your vehicle, it doesn’t negatively affect either in any way. Also, once you place the load it will automatically center itself. It would be nice to have an option in the game settings for level of difficulty, so those wanting a truer-to-life experience could have the option for a more realistic loading process.

Out on the open road

Pulling away from the warehouse, the mini-map displays the local roads with your route highlighted in red. Driving is pretty straightforward with the keyboard but a little difficult to control in turning situations, but this is typical for keyboard controls. Looking around, changing camera views, turn-signals, and zooming in and out are well placed and I found it very easy to get the hang of the helm. Getting from start to finish was relatively fun, driving wasn’t frustrating and felt at times quite relaxing.

Unfortunately, it was not all unicorns and rainbows. I began by being very cautious, following all the rules of the road, and avoiding any kind of mishap with my fragile cargo. Upon reaching my destination, maximum reward! Yes, I’m awesome! I then began to test the physics of the game, going fast while breaking just about every traffic law on the books. No penalties for speed violations, running lights, jumping lanes, or off-roading. Alright, let me see just how “fragile” this cargo really is. I basically played smash ’em derby from beginning to end, my cargo doing somersaults in the trailer as I went rogue on the road. My damage penalty to the cargo, in the end, was just 2%! Either the guys that packed the pallet did an amazing job or the game needs to revisit how damage calculations work.

Driving around in the world, knowing I would have to account for the visuals and sound caused me to be a bit conflicted. Was I awed by either? Definitely not. Were they horrible? No. I should note I played at maximum settings, everything full tilt on an AMD RX5700 XT. Visually at times, the game looks pretty good; light reflecting off vehicles, various scenery, and a few environmental objects such as the sea are done quite well. The world begins to look rather bland and repetitive, edges of animations were a bit jagged and enough that it prevented full immersion in the game.

Sound is average, nothing great or bad. I did like little details like including squeaks to the trailer chassis and the brake squeal, a nice touch. No real atmospheric sounds that I could detect, the addition of ocean waves as you drive near the coast or city noises would be nice.

Lastly, there were a number of repetitive graphics glitches which hopefully will get fixed in future updates. Vehicles spawn in the world within view distance rather than driving into view. Traffic will regularly stack up in odd spots or drive on non-existent roads, several times crossing right in front of me on a road to nowhere. Collisions don’t result in any visible damage to the vehicle, cargo or trailer, hopefully something they’ll add in future updates.

This review for Truck & Logistics Simulator was done on a very capable rig running a Ryzen 9 3900x CPU and 32gb RAM, plus the RX5700 XT graphics card. Needless to say, game performance wasn’t an issue. Despite the game being in Early Access, I never experienced any game-breaking bugs or crashes. The game currently priced on Steam for $19.99, this week with a 25% discount ($14.99), and given the content and potential, a very fair price.

Multiplayer offers the ability to play with others or friends, a nice addition for a game at this price. I tried it briefly but at the time there was only one server available in my region with three active players. They’ve included common message options giving the ability to quickly “shout out” to others while driving which is handy. I crossed paths with a few players on the road but no real interactions or any experience to really give an honest opinion on this aspect of the game.

Again, I did have various graphics glitches and felt the game needs more polish. Additionally, the ability to drive full throttle from start to finish, knocking people out of my way as my cargo bounced around endlessly to only take minimal penalties is not realistic enough for a simulation. I imagine this will get fixed in a future update or at least the ability to choose game difficulty for those wanting a greater challenge.

Despite having high expectations before beginning the review of Truck & Logistics Simulator because of the very credible library of simulators published by Aerosoft, I was initially a bit disappointed. However, I did find the game enjoyable and found myself wanting to keep pushing forward to get to the next, better vehicle. There are plenty more vehicles for me to purchase and equally more loaders to try and I definitely plan to continue. The concept is solid and being in the very first week of Early Access, so much potential exists to make this game another success for Simula Games. If you don’t mind being a part of a game undergoing development, knowing there will be glitches and bugs along the journey, Truck & Logistics Simulator has the potential to be a great sim for your game library!

Check out the Steam store page to purchase the game or add it to your Steam Wishlist. 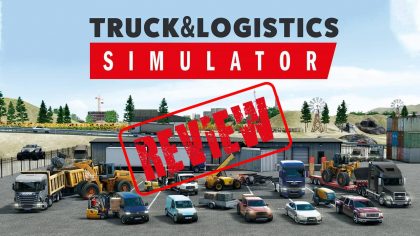 A review of Truck & Logistics Simulator from Simula Games, published by Aerosoft GmbH, just released on June 23rd as part of Steam's Early Access for PC. Perform logistics from beginning to end in single or multiplayer. Take control of more than 20 unique vehicles to perform complex loading tasks and deliver the diverse cargo directly to your customers.

“Road Z: The Last Drive” Zombies vs Cars? Sure.