Kartridge, the PC gaming platform from Kongregate, has launched its Open Beta, making it available to the public for the first time on Kartridge.com and a Windows and macOS desktop app.

Kartridge is focused on cultivating the best gaming experience by providing players with compelling community features, substantive rewards, and a celebrated library of games. Completing game- and platform-specific badges and quests earns Kartridge players rewards including “Kartridge Tokens” that can be collected and used to purchase games outright. The deeper players engage with their games, the more they will be rewarded for their investment, enlarging their overall Kartridge library.

The Open Beta features over 250 titles from over 100 founding developers, including indie favorites West of Loathing by Asymmetric, Kingdom: New Lands by Raw Fury, Speed Brawl by Double Stallion, and Production Line by Positech Games. Kartridge’s editorial team will work closely with selected developers to implement curated badges within many popular games, giving players the ability to level up by playing the games they own and love. 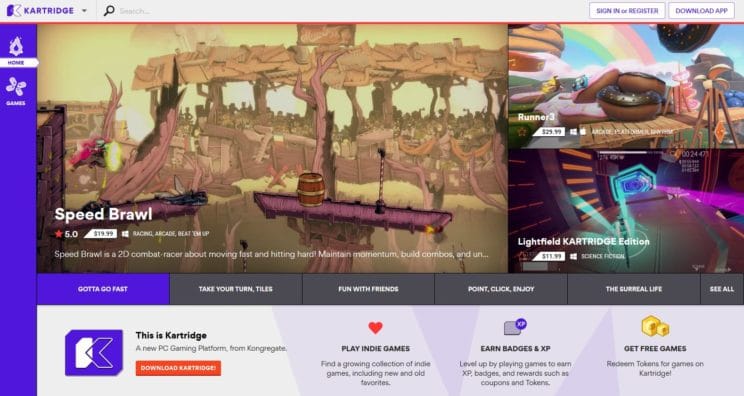 “Today’s Open Beta launch is really just the starting point for Kartridge,” says Kongregate’s Creative Director of Platform Theresa Chien. “As we keep expanding into a rich social playing experience, players can expect to see great, new games added each month, community events, and plenty of reward opportunities on the platform.” Chien continues, “We’re also looking forward to seeing how players and developers interact with the platform, and learning what features are most important to our audience as Kartridge grows.”

Other social features include community-based reviews and ratings, and chat, which employs sentiment-based automated moderation, in line with Kongregate’s continued effort to keep its communities safe and fun. Players can chat while gaming, choosing between game-specific rooms or conversing in larger, general discussions. 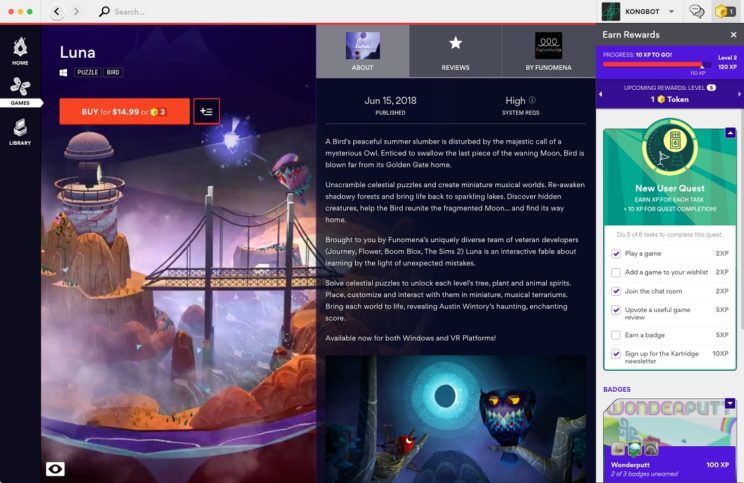 “We are very excited to finally let players game with Kartridge,” Emily Greer, CEO of Kongregate says. “We’ve pooled all our web, mobile, and PC knowledge to create something we think both developers and players will really enjoy – a streamlined, innovative experience focused on gaming, community, and fun.”

As Kartridge continues to expand, Kongregate is focused on broadening its current community features, creating more ways to play with your friends, and expanding on the rewards and achievement system. While Kartridge resembles the same achievement system that is so successful on Kongregate.com, the team intends to develop it further than its predecessor, making it foundational to the player’s core social and gaming experience. Kartridge will also help developers understand how players are getting to their games by partnering with robust analytics technologies, and has collaborative plans with other leading industry partners who focus on indie games and developers.

Game of Life, A Documentary Film For Gamers

The hunger for a new deck continues Redrame Gwent: The Witcher Card Game
265 226,222